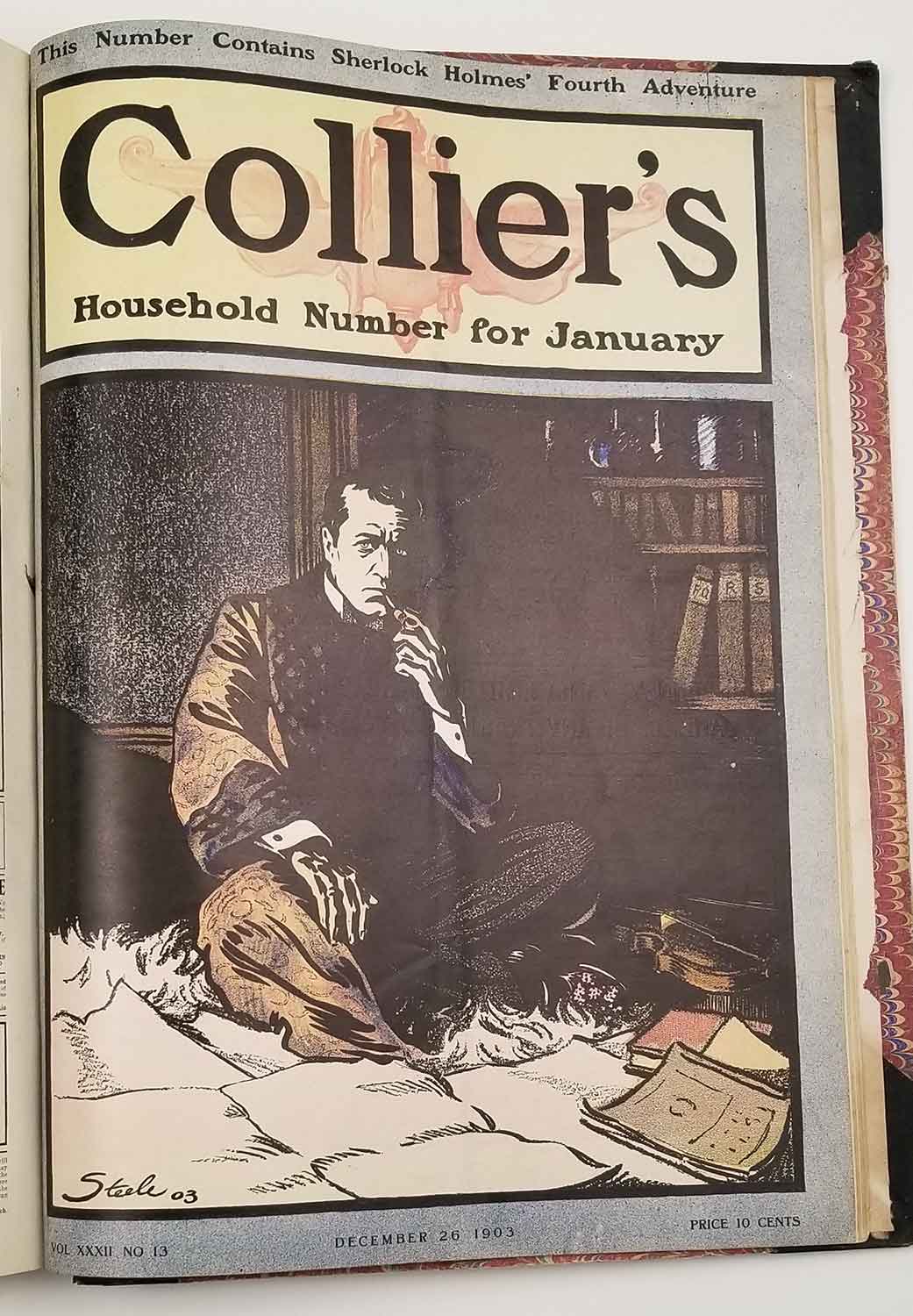 Emanuel Bowen (cartographer); William Hogarth; et al.
London. D. Henry and R. Cave at St. John's Gate. 1754.
Volume XXIV. Bound volume, 3/4 leather binding (spine perished, covers detached and very worn); 8 3/4 x 5 1/4 inches; title page and preface; 603 pp and index. Bookplate on verso of front cover of Richard Pulteney, MD, the English physician who advanced acceptance of Linnaean taxonomy and the author of the first English language biography of the botanist. It appears the volume subsequently became the property of the Exeter City Library, as is affirmed by the presence of several circular ink stamps on various pages. Volume notable for two (uncolored) maps, "British American Plantations" by Bowen, and "Discoveries of Admiral de Fontes." One plate, Bridge at Blois, suffers a clean tear along one fold. With regard to the plates, the volume has been eccentrically bound. Several plates are not present, others are bound not according to the publisher's instructions, while there are present plates from other sources. These plates are of eminent men of the time and are inserted at intervals throughout the volume. Overall, contents in good condition, with plates bright and clean--although somewhat of a grab bag in terms of their organization plus the unlisted presence of additional subject matter. Present is a bright and clean copy of Bowen's "Map of the British American Plantations...from Boston...to Georgia." (9 x 11 1/2 inches.) This highly detailed map identifies the Plantations along the east coast and also English and French forts, the topography of the region and established trails leading inland to the Mississippi. It is particularly noteworthy for the delineation of Indian tribes to the west of the Blue Ridge Mountains; indeed, it is a preeminent map in this regard. Also present is M. De l'Isle's "A General Map of the Discoveries of Admiral De Fonte & Others" (8 x 10.75 inches) depicting discoveries in the North Pacific with attention to the supposed Northwest Passage. The map has been described as "a spectacular example of imagination and fiction on the one hand and up-to-date cartography and information on the other" — this latter based on De l'Isle's access in St. Petersburg to secret maps of Russian discoveries, as well as personal experiences on a voyage of Russian exploration (source: Wendt Collection website). There are six or more engraved portraits of eminent men not called for in the volume's list of plates. These are: Hogarth's James Gibbs, (the noted architect); Hogarth's Martin Folkes, (President of the Royal Society); Captain Isaac Schomberg, (famed for his exploits in the American Revolutionary War); Alexander Cruden, (eccentric Biblical scholar); Richard Mead, (physician); and William Dampier, (explorer and natural historian of New Holland). Also present in the volume is an account of George Washington's "Journey from Williamsburg to the French Fort, near the Lake Erri, in Virginia." The object of Washington's travels was to dissuade Native Americans from all dealings with the French. A fascinating volume warranting the renewal of covers and spine. Contents in overall good condition, with occasional soiling and offset. Item #50809