The history of pictorial maps extends to the earliest days of cartography. In early European mapmaking, pictorial elements (pictographs), such as castles, sailing ships and animals, often appear. As maps were increasingly used to convey “just the facts” in the 18th and 19th centuries, the use of decorative features in maps became less common.

Bird's eye view maps are a complementary technique featured in early geographies and histories, such as the Nuremberg Chronicle. In the late nineteenth century they were widely employed to chronicle the development of American cities.

Both these areas of cartography experienced a resurgence in the first half of the twentieth century, but 20th century pictorial maps have until recently received little attention. Indeed, even if produced in relatively large quantity (often given away free, some with instructions to “pin on the wall”), many of these maps are now quite scarce because of their ephemeral function.

From our experience collecting 20th century pictorial maps, MacDonald Gill’s Wonderground Map of London Town (1913) stands out as pivotal in this resurgence: during a rather pedestrian period of map publication it is an outstanding graphic, an oversized explosion of color and humor, harnessed to the goal of publicising a burgeoning popular transportation system. Over time we have collected many other maps from the 1920s and 30s which showed a clear debt to Gill’s map, and have thought of them under the umbrella “wonder maps.”

Elisabeth's article exploring this genre "MacDonald Gill: The Wonderground Map of 1913 and Its Influence" appeared in the Spring 2009 issue of the Journal of the International Map Collectors Society. In this article, she discusses influences behind the creation of the Wonderground Map and its innovative features, and provides illustrations of "wonder maps" from around the world. Copies of the Journal can be purchased from the IMCOS website at www.imcos.org.

In the United States, such well known names as N.C. Wyeth, Miguel Covarrubias, Jo Mora, Ruth Taylor White, Ernest Dudley Chase and John Held produced pictorial maps in this period, with much excellent work being produced by lesser known or now unknown artists. However, surprisingly little is recorded about many of these illustrators. So as we acquire these artifacts of popular culture, we endeavour to gather material about their origins.

Listed below are examples of the work of some of the designers of these pictorial maps: email us if you would like to be informed when a particular one is available for sale. If you have already, or think you might, fall under the spell of pictorial maps, sign up for my pictorial maps listing (a brief catalog of newly catalogued pictorial maps, and other information on pictorial maps emailed on an occasional basis).

We look forward to hearing about YOUR particular interests in this field and comments on collecting in this area. We are eager to hear from others with information on the artists and publishers behind these striking images which provide such an entertaining glimpse into our past. 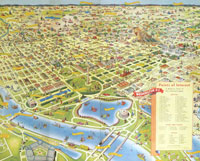 Edward Camy was born in 1904 in Fresno, CA. He died in San Francisco in 1958 at the age   of 54. Most of his life was spent as a graphic artist/illustrator in his San Francisco studio. Besides his illustrations for the Alaska Steamship line, he did illustrations for Santa Fe (illustrations of Passenger Trains) during the 1930's, 1940's. He also did artwork that appeared on highway billboards (the old  Signal Gasoline) and magazine ads (such     as Dole Pineapple). Much of his work as an illustrator included the cartoon style portrayed on the "Good Natured Map of Alaska."

At right: A Good-Natured Map of Alaska showing the services offered by "The Alaska Line" and suggesting some of the most interesting features of the Territory. 1934. 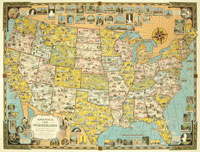 At right: America the Wonderland.  A Pictorial Map of the United States. 1941. 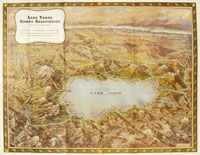 An (Incomplete) Check List of Maps by MacDonald Gill 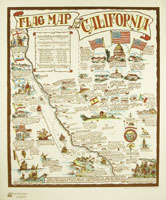 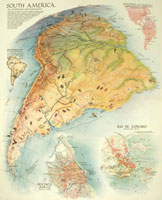 In 1932 the Lindgren Brothers of Spokane, WA. began manufacturing colorful silk-screened maps depicting iconic national parks and other scenic areas. With emphasis on both verbal and visual humor, they titled these inexpensive tourist souvenirs "Hysterical Maps," seeking to distinguish them from "historical" pictorial maps, a genre then in vogue. Their popularity with the public prevailed for more than two decades and today "Hysterical Maps" produced by the Lindgrens occupy a signal place in the vibrant arena of twentieth century comic cartography. 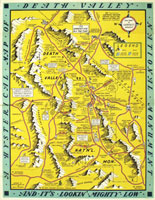 Edward Gerstall McCandlish had an extraordinarily varied working career including being a staff cartoonist at the Washington  Post where he illustrated a Sunday column called the "Bunny Tots", an illustrator of many children's books and designer of many toys, and designer of three humorous pictorial maps: The Bootlegger's Map of the United States, The Ration Map of the U.S., and the "Un-Convention-Al Map of New Haven." His family has a website devoted to his children's book illustrations at http://www.frontiernet.net/~mccandlh/edward.shtml

At right: Bootlegger's Map of the United States. 1926. 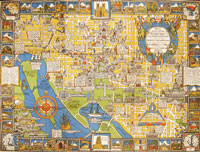 At right: Map of the City of Washington in the District of Columbia shewing the Architecture and History from the Most Ancient Times Down to the Present. 1926. 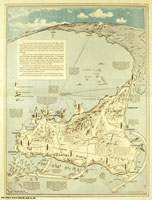 Routledge started illustrating for The West Shore magazine in the late 1800s; when that publication ceased operation he moved to   The Oregonian newspaper where some of his first panoramic bird's eye views were published.

At right: A Map of the Bermuda Islands. The Sommer Ilands. Ia des Demonios Isles of the Devils. 1930. 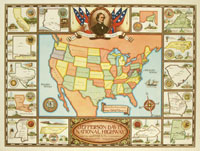 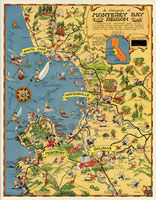 At right: A Cartograph of Monterey Bay Region. 1932.