Colortext Maps of the 1930s

Beginning in 1935 a Chicago publisher, Colortext Publications Inc., issued a series of arresting color pictorial maps, chiefly of European countries, that employ, in the map’s title, the prefix “The Story Map of …” followed by the country or locale’s name.  The maps were intended to convey significant aspects of history and culture pictorially, employing images of places, persons, or design motifs associated with a given nation’s or geographical region’s cultural identity.

Unfortunately, very little is known about Colortext’s origins, the personnel involved in its operations, or those individuals responsible for most of the maps that were produced.  Thus a primary objective of this site is to call attention to the firm and its activities with the hope that new information regarding the company and the cartographers involved in its product will be forthcoming.

Colortext is initially identified in Worldcat listings as the publisher of a series of pamphlets for young persons issued in connection with Chicago’s “Century of Progress International Exposition” (1933-1934).  The twelve titles (circa 1933) are collected in a series identified as The Century of Progress Wonder Library (individual titles are listed at the end of this article)1.  The address of Colortext is given, in several of these booklets, as 620 North Michigan Avenue (the site of the Decorative Arts Building, which was demolished in 1995)2. 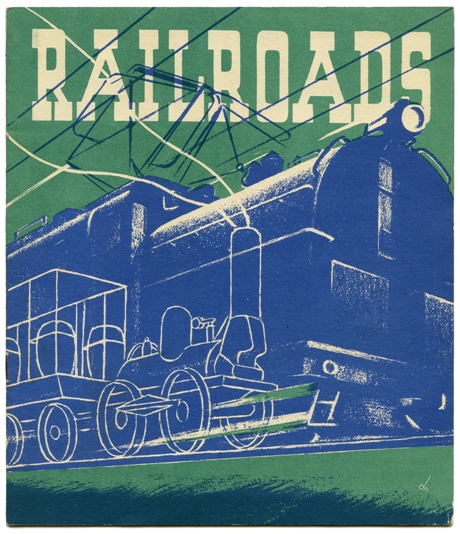 An illustrator associated with two of the titles in the Wonder Library is Egbert G. Jacobson (he was the author and illustrator of “The Earth” and the illustrator of “Magnets”).  In 1936 Jacobson became Director of Design at the Container Corporation of America and, in this position, is said to have been instrumental in advancing European Modernism through the company’s design and advertising work.3  Jacobson, in his book “Basic Color: an Interpretation of the Ostwald Color System” (Chicago: Paul Theobald, 1948) also explored concepts of color theory as developed by Nobel laureate Wilhelm Ostwald.

The earliest Colortext maps date from 1935, after the close of the Exposition, and it is evident that Jacobson remained connected with the firm, as what appears to be the earliest Colortext map, the “Story Map of England” (copyright January 25, 1935) is signed by Jacobson in the lower right-hand corner.  In its compositional features, the map (17 x 13 inches) is representative of the eleven Colortext “Story” maps published between 1935 and 1939.  Along three borders there appear small portraits of famous persons drawn from the history of England (Elizabeth I, William the Conqueror, Chaucer, Samuel Johnson, etc.)  Tiny pictorial images with annotations appear adjacent to many of the towns and cities located on the map (e.g. an image of half-timbered buildings and the notation “Shakespeare’s Home” are next to a banner identifying “Stratford.”) Larger images at the bottom of the map depict iconic London buildings: St. Paul’s; the Globe Theatre; Tower Bridge; etc.  The map’s dual purpose seems evident: to provide an attractive as well as educational object conveying history and cultural identity in a geographical context. 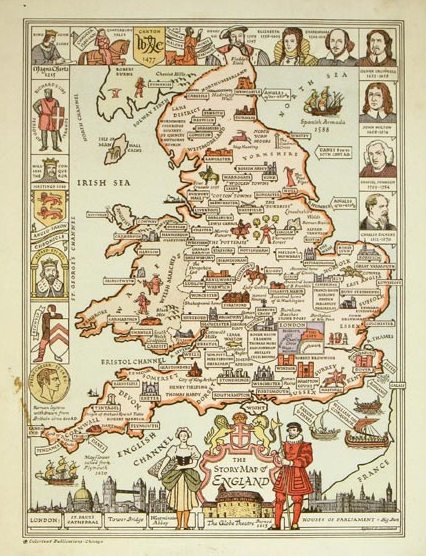 Interestingly, three early publications in Colortext’s map library were the work of the pictorial mapmaker Ernest Dudley Chase who, in 1935, was in the early years of his map-making career.  It appears likely that these Colortext maps were published by arrangement with Chase utilizing a printing technique different from the self-published Chase originals.  The three maps were “The Story Map of Germany” (1935), “The Story Map of Italy” (undated; circa 1935); and “The Story Map of Switzerland” (1936).  The Chase maps are crisp and sharply defined in their delineation while the Colortext versions are full-color lithographic editions, muddier in their presentation and slightly altered with regard to specific details that appear on the Chase prototypes.

Also published in 1935 was “The Story Map of Spain,” significant in that, unlike the majority of the Colortext maps, it, like those mentioned above, is credited to a specific artist, in this case the Spanish-born Julio de Diego.  Diego emigrated to the United States in the 1920s, settling in Chicago circa 1926 where he began exhibiting through the Art Institute of Chicago.  Another credited map, the 1936 “Story Map of France,” is signed on the map by A. Walker and W.E. Vogelear.  As with several other maps in the series, design motifs in the map’s border are identified as having been derived from artwork of central importance to the country’s cultural history.  In this instance text in the lower right corner of the map reads: “Border Design and Decorations from 17th Century Louis Quinze Tapestries and 18th Century Robert De Cotte Ornaments.” 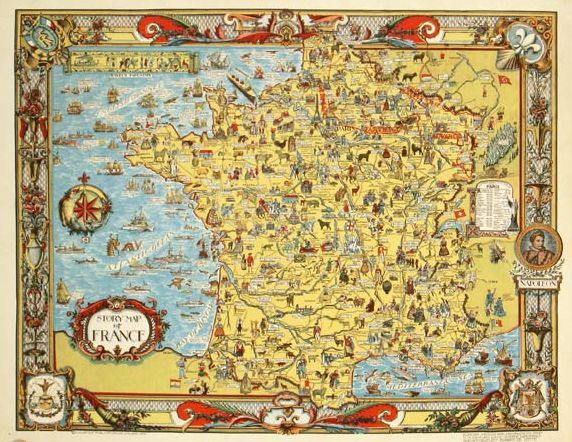 It appears that at some point in the years following World War II Colortext (or likely the inventory that remained from the business’s heyday) was purchased by Chicago businessman Paul Mandabach, the author of “Drug Store Merchandising: Ways and Means” (1923) and the “Instruction Manual for the Paust Electronic Stimulator” (1954). The Catalogue of Copyright Entries from 1950 lists Paul J. Mandabach as obtaining a copyright for “The Story Map of the West Indies (Col. Map 32 x 40 cm).”  A copy of this iteration of the West Indies map, a somewhat muddy color photographic reproduction of the 1936 original, is notated on the bottom margin: © Colortext Publications, Inc. Chicago 1950.

In 2009, in an Ebay listing for a Colortext “Story Map of England,” the seller wrote: “This was my grand fathers company and most copies were lost or thrown away….” An inquiry to the seller regarding the map elicited the following response: “I only have a few maps….  My grandfather was Paul Mandabach and he was in advertising and he had a retirement home in Palmirya [Palmyra] Wisconsin for retired drugists….”4  The 1950 West Indies map appears, for all practical purposes, to be Colortext Publications Inc.’s last hurrah, but it  is by no means the end of the story.

Although the “Story Maps” of the 1930s are eminently worthy examples of pictorial cartography, two Colortext maps created at the end of that decade broke away from the “Story Map” format and nomenclature to establish themselves, from a contemporary perspective, as the finest products created and published by the company.  These are two color birds-eye maps of very diverse locales, the first published in 1938 and the second in 1940. They are titled, in order of publication, “Chicago the Greatest Inland City in the World” (image size approximately 20.5 x 17 inches) and “Military Panoramap of the Theatre of War” (image size approximately 16 x 20 inches). 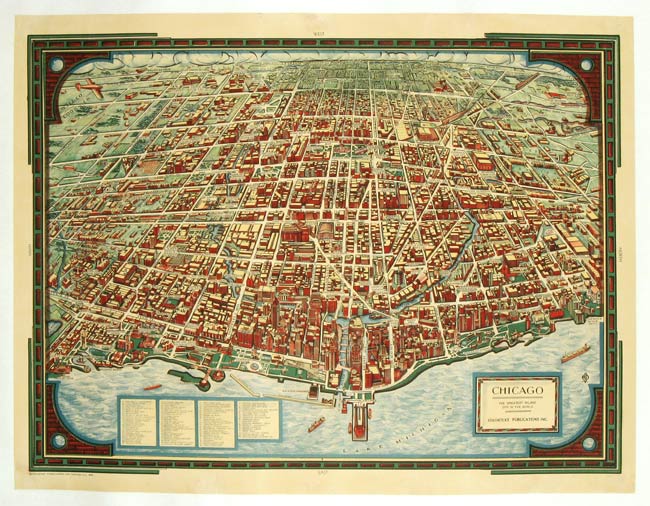 The lithographed Chicago map depicts the city looking west from Lake Michigan.  A panel at bottom left lists 94 different buildings (civic, business, cultural) that are identified on the map itself.  No cartographers’ names appear on either map; however, the Chicago map has a stylized initialed signature (inverted, as printed, with, beneath the three letter monogram, also inverted, the numerals 3 and 8, indicating the date of publication).  These initials are (possibly) “CLH” with the middle letter dominant (see illustration).  The map is a striking production, remarkably clear in its depiction of a huge number of sites spread across the city. 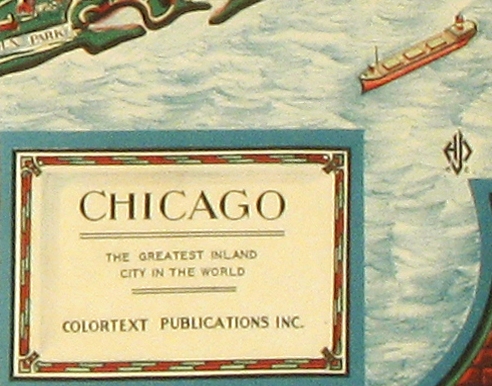 “The Military Panoramap of the Theatre of War” has an informational subtitle:  “Observation Point 200 Miles Directly Above Bern.”  This extraordinary map’s panoramic focus centers on France and Germany but includes, at its borders, portions of England, France, Switzerland, Norway, Sweden and other European nations.  Along the Rhine, Germany’s defensive Siegfried Line is shown. It is balanced in France by the Siegfried’s counterpart, the defensive Maginot Line, which turns northwest from the Rhine to terminate at Dunkerque (Dunkirk) on the North Sea.  Along the Maginot’s westward trajectory several “Gateways” or “Gaps” are shown (Lorraine, Luxembourg, Moselle, etc.) depicting geographic pathways between Belgium, the Saar and France. The English Channel separating England and France is shown defended by the Dover Patrol, comprised not only of ships as in WWI, but also aircraft. The map’s border is particularly striking, with images of aircraft across the top, warships across the bottom, and heavy artillery and tanks in the margins right and left.  Unlike the Chicago map, a color photographic printing process has been employed.  It would appear that this is the final Colortext map published, although there were subsequent editions of some maps initially published between 1936 and 1939.

From this brief survey it can be seen that, in its short history, Colortext created a number of memorable maps culminating in the two discussed above, both of which depart from the “Story Map” format most frequently associated with Colortext publications.

Ideally, this Introduction to Colortext and the maps produced by the company will generate additional information regarding the history of the company and the personnel involved in its management and cartographic creations.  Should you, reading this essay, have additional information regarding the firm, I would be pleased if you would contact me by email at imprints@oldimprints.com .

A Chronological Listing of first editions of Colortext Maps (1935-1940)

For an image of the map see:  http://www.oldpogue.com/history/

Signed with the artist’s initials and, below, the numerals “3” and “8”

2. In response to an inquiry from Elisabeth Burdon (oldimprints.com), Bob Karrow of the Newberry Library has provided the following information: “Colortext Pubs.” is listed in Chicago phone books from at least 1934 to at least Dec. 1938.  In '34 and '35 they were at 8 South Michigan (the Willoughby Bldg.) and '36-'38 at 20 N. Wacker (the Civic Opera Bldg.).  Both buildings are still standing.