Antique Botanical Prints are not only lovely to look at, but also reflect the fascinating story of the development of botanical and hoticultural studies and of the emergence of different printing techniques.  You may wish to gather a few beautiful examples for decorative purposes, or choose to make a collection of examples which reflect the advance of knowledge in these fields.  In any case, there is so much more than the image to explore.

Herbals, depicting useful plants often of the humblest appearance, were the first botanical printed works to appear with the development of the printing press in the late fifteenth century.  Their function was decidedly utilitarian, and, with a few notable exceptions, objectives of an artistic nature remained for botanical illustrators of a later epoch.  at first these herbals retained the characteristic stylisation of so many of the manuscript herbals, from generations of hand copying and recopying, but by the mid sixteenth century the Renaissance demand for scientific accuracy began to assert itself. 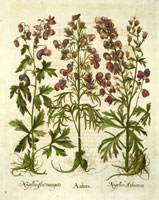 The sixteenth century voyages of discovery brought an influx of strange plants to Europe from all over the world, which wealthy flower enthusiasts bred and proudly displayed in splendid flower gardens.  This led to the appearance early in the seventeenth century of "florilegia" - picture books of ornamental plants, rather than the useful plants portrayed in herbals.  At the same time, the substitution of metal plates and intaglio printing for the woodblocks of the herbals brought a new delicacy of line and, with this, possibilities for greater sophistication of image.

The introduction of the Linnaean sexual system of plant classification in 1737 and its almost universal acceptance gave a tremendous impetus to the writing and illustration of botanical books.  Benefiting from improved printing techniques, botanical depiction in the latter half of the eighteenth century saw the marriage of beauty and scientific accuracy.  Artists such as Redoute profited from the newly developed tchnique of stipple engraving, which effectively produced tone.

More illustrated flower books and magazines were published in the first half of the nineteenth century than in the whole of the eighteenth.  Both black and white and color reproduction reached a standard that has not been surpassed, largely owing to the skills developed by artists, engravers and printers, in response to the demands of the botanists.  The development of lithography, which allowed many artists to produce their own plates, played no small role in this artistic burgeoning.

Early herbals were published in black and white, with hand coloring sometimes being added by owners.  Printing in color was introduced in the eighteenth century, although hand coloring before publication was until the nineteenth century the more common, less expensive, method, particularly in England.  In the later part of the nineteenth century wood-engravings printed in colors (chromoxylography) and lithography printed in color(chromolithography) became the most commonly used methods.