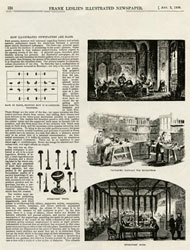 Reproduced here are three pages from a newspaper of the mid 1800s which describe the intricate process by which the illustrated newspapers of that time were produced.

Of particular interest is the discussion on the engraving of the woodblocks. In most cases, the engravers are not credited on these engravings because the illustrations represent the work of many. However for special pieces the block would be engraved by a single person, who would sign the block (for instance, some later wood-engravings after Winslow Homer). Oldimprints.com offers for sale many examples of these 19th century wood-engravings, encompassing diverse subject matter: these items can be viewed in both the Antique Print Gallery and the Vintage Magazines Gallery.

The illustrations on this page of the newspaper are subtitled:
IN TEXT COLUMN AT LEFT:
"Back of block, showing how it is fastened together"
"Engravers' tools"
TWO LOWER ILLUSTRATIONS IN RIGHT HAND COLUMN:
"Preparing boxwood for engravings"
"Engravers' room" 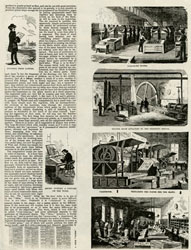 The text on the page at right reads in part:

"Information is received that an accident has occurred, or that some great mass meeting or other event will take place. Immediately one or more artists are dispatched to the point of interest, and by long experience hasty sketches are made that are to be elaborated when put on the wood, which is the next stage of their advancement. The wood used is that known as "Boxwood," so much a favorite as a shrub in our gardens, but which in Turkey expands by slow growth into a tree with a trunk of a few inches in diameter. This valuable product is nearly as hard as flint, and can be cut with great precision. From the diminutive size natural to its growth, it is only possible to produce pieces large enough for the purposes of an illustrative paper by joining innumerable small bits together and fastening them by screws on the back of the block, as will be seen by the engraving. The block of wood having been selected, and the "traveling artists" having supplied the subject, other artists again are employed in putting the design on the block, which when done is one of the most beautiful works of art without color that can be imagined. The hour of publication is near at hand, and here we have a two-page picture to be engraved, which cannot be completed by a single hand under several days of hard labor. What is to be done? The screws which hold the small parts of the wood together are unloosened, and the block is divided into ten or twenty parts. Upon each there is but the fragment of the drawing; one has a little bit of sky, another a group of children cut in two in the middle; another, part of a house; another a trunk of a tree; another is covered with foliage. Ten or fifteen engravers now seize these fragmentary pieces, and work night and day; not a moment is lost; they silently and industriously pursue their work, and the surfaces of the several blocks are cut away save where they are marked by the image of the artist's pencil, and we have left the surface which makes the impression on our paper known as a wood engraving. The engravers' tools are very few in number, and very simple in construction. They are called: 1. flat tool; 2, 3, 4 and 5, gravers; 6 and 7, tint tools; 8, sand-bag and stand on which the block is laid; 9, scraper; 10, chisel - and cost comparatively but a small sum; yet with these simple tools the engraver, with an incomprehensible certainty to the spectator, runs through the complicated outlines of the innumerable forms which make up the pictures of our weekly edition, displaying a skill of handling to our notions as wonderful as the touch of the artist himself." 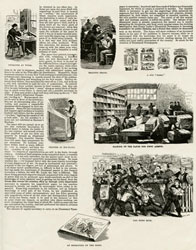